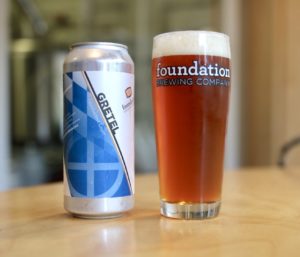 Munich is famous for many of its traditions revolving around beer, but none is bigger than Oktoberfest. Originally a celebration of a royal wedding, it has morphed into a two week long festival of beer, music, and traditional foods. This was when the rich, amber lagers brewed in March, called Märzen, would be rolled out of the caves around the city where they were stored cool over the summer. Because this style of beer became synonymous with Oktoberfest, the name stuck, and that is how they are best known through most of the world today.

Gretel Oktoberfest Lager, is a nod to this tradition. The malt bill is very simple, German Munich Malt blended with a touch of Maine Pale malt. The Hallertau and Tettnanger hops, and our lager yeast, also all hail from Germany.

Pouring a clear copper color under a beautiful white head, the nose promises a rich, bready malt flavor that follows through on the palate, with just enough hops to keep it balanced on the back.  Rich and satisfying, this is very much a beer meant for sharing and enjoying with friends.