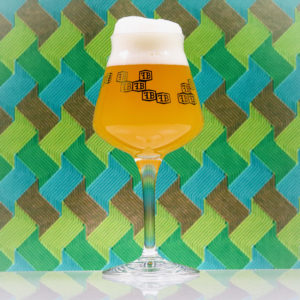 We tend to think of hops and the flavors they bring musically. The fruity, sweet and floral flavors so sought after in modern IPAs are called the treble of the hops.  The darker, greener and danker flavors we like to call the bass of the hops.  Just like in music, you can do some fun stuff for a while with just one end of the spectrum or the other, but to make something really great, something that will grab your attention, you need a balance.

The New England IPA is a fun style in this regard, because it tends to be about smooth curves. As a brewer, you are trying to use hops, something that is inherently bitter and biting, and knock off all the sharp edges to create something that is fruity, smooth, and soft. Instead of hunting bitterness in the form of alpha acids, the brewer is now hunting depth and saturation in the flavors of the hops. To accomplish this, one of the usual approaches to IPA brewing, dosing hops throughout the boil, are thrown out the window in favor of large doses of often very fruity hops after the boil is completed, and adding more hops during and after fermentation. The heat in the kettle is replaced with time and the magic of fermentation to transform the hops into the flavors the brewer is looking for.

For our new IPA Mindstorm, we wrote a recipe that like most New England IPAs focused more on the treble. But as we were discussing the flavors we wanted in Mindstorm, we kept asking, what would happen if we mixed it up? Brew a beer with 100% late addition hops, but instead of amping up the higher notes, we wanted a beer you could feel. So we decided to brew a new beer where we juiced up the bass. Envisioned as sailing on an ocean of saturated hop flavors, the treble is there at the top, but as you dive deeper, you can feel the bass really starting to kick. Thus Dreamboat was born.

Starting off with those treble flavors of fruit and floral, as you dive deeper, you taste the green, dank flavors of the bass. We hope you enjoy this twist to the NEIPA game as much as we enjoyed thinking about it and creating it. Cheers!