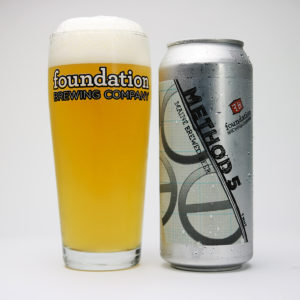 What exactly is a Brut IPA? We have been hearing about a new approach to IPA that has been coming out of Northern California. They are very different from the more traditional “West Coast” style IPAs that tend to focus more on the balance of malt to bitterness. The concept here is to take the fruitiness of a New England style IPA, but marry it with a super dry and crisp body. The end product should be an amazing, sessionable beer that tastes like a fruity IPA, but drinks very bright, crisp and light, like a sparkling wine. It is the dryness of these beers that are their hallmark, and gives them their name, Brut IPAs. The more we learned, the more we were intrigued we were to try making one ourselves.

The key to a Brut IPA is a super light body. To achieve this, we used a very simple malt base of Pilsner and Maine-Grown Pale Malt and mashed it to be as completely fermentable as possible. Then, to take it to the next level of dryness, we added an enzyme that distillers have used for decades to help break down any residual sugar or starches. The end product we hoped for was a wort that would ferment down to bone dry deliciousness.

We hopped the beer like it was a New England IPA, choosing to use exclusively Azacca and Hallertau Blanc for this beer. We had found these hops had a tendency to throw flavors reminiscent of white wine when combined with our yeast, and we wanted to see how “wine-like” we could make this. Fermentation took off, and the beer dropped to under 0.1 Plato over the course of fermentation. After fermentation and cellaring was complete, the beer was carbonated more aggressively than is typical for us, at over 2.8 volumes. It was a bit of a challenge to get this canned, but credit to our packaging crew for making it happen.

The end product is a really fun beer that was a blast to make.  Very light in color, the beer is a hazy straw yellow. Pouring very spritzy, all that carbonation helps bring the aromas of white grape, pineapple, cantaloupe, grass and honeysuckle to the nose.  Those fruit flavors make the beer taste slightly sweet and soft at first, but quickly finishing very crisp and dry. It is one of those beers that just seems to disappear from the glass. On draft and in cans in our tasting room on Friday, July 27th.