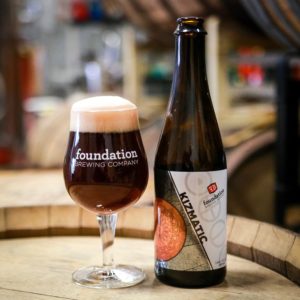 When we started our barrel program, we had a clear vision for some of the beers we wanted to make. Magnus, our sour red, is our love letter to the wonderful red ales of Flanders. Panoptic and Moveable Type are our reflections on the farmhouse ales of Wallonia. The specific barrels and cultures, was well as what we were looking for in the aging, are all part of the vision before we brew these beers.  Then the day comes when it all comes together, and the beer is ready and is bottled. But, as we lay the last bottle down in the cellar, we are left with the freshly emptied barrels. Sometimes there is already a plan for those barrels, but when there is not, we have a chance to invite fate and strike a new path.

In 2015, we had this opportunity. As we finished racking our sour red ale Magnus to barrels, we had a little more of the base beer on hand than we needed.  We had just emptied some twice-filled bourbon barrels for another beer, so we filed a couple of those.  Of course, we ran out of Magnus before we got them topped off, but we had some of our porter, Bedrock, on hand and we decided to use that, and topped the barrels off.  A few months later, we emptied barrels of Pomology:Cherry, leaving the fruit behind in the barrel. Seeing another opportunity, we moved the beer, barrel to barrel, onto the fruit. We did not have a plan for these barrels, instead just leaving the process to chance.

Over time, it was clear one barrel was doomed, becoming more harsh and rough, and was ultimately destroyed.  The other though, was delightful, but felt incomplete. We still did not really have a plan for the beer, but that was when Logan, one of our production team members who is deeply passionate about wild and barrel aged beers, made it his mission to find the right fit.

When Logan was preparing to bottle Briar, a sour pale ale brewed with raspberries and blackberries and aged in third-use bourbon barrels, he realized he had found the right fit to match this mystery barrel. Blended together this barrel had found its home.

The resulting beer is one of balance and nuance. Though cherries, blackberries and raspberries are all part of this beer, they are integrated with the malt, oak and funk. None of these flavors are dominant, instead working in harmony.

We felt the name of this beer should pay respect to all the twists and turns that happened to make it a reality.  Derived from the word kismet, we felt Kizmatic captured all the happenstance and quirks that went into this beer. 100% barrel-aged, with half of the blend having been aged for over 3 years, we have no way to ever duplicate the process that created this beer, nor do we want to.  Kizmatic is a unique expression of circumstance, to be celebrated and enjoyed until it’s gone. Beers like this are intriguing and delicious in ways that can’t be replicated by any process other than a commitment to time, patience, and chance. It is important for us as brewers to continue to explore and offer beers like this that we love  which is why we are so excited to be able to share it with everyone in celebration of 5 years of Foundation Brewing. Cheers!