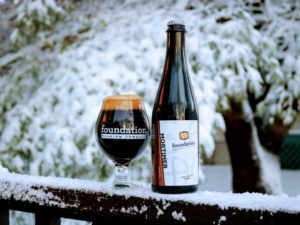 We are very excited to present Mortimer, our tribute to stock ales, strong brews long aged to develop rich and complex flavors. Though not our first barrel-aged beer release, this was the first beer we put in oak.  Our patience was rewarded.

Mortimer was initially conceived as kin to our Imperial Stout, Forge, but with a softer roast character to balance the flavors of the wild yeasts and bacteria introduced during the cellaring.  The beer was aged in previously used Jim Beam barrels for over 18 months, and then bottle conditioned for another 10 months.  The long slumber has matured the beer, allowing for the development of cherry and dark fruit flavors that meld with the cacao, soft vanilla and bourbon notes from the barrel and malts. Shockingly light for such a big beer, the rich flavors are met with a soft acidity that cleans the palate, inviting you back for another sip.  Mortimer is a tribute to the power of patience and time, and is the perfect beer to enjoy as we contemplate the year that is passing, and look forward to the promise of the one to come.

Mortimer is a tasting room release due to the limited amount available.  It will be released on December 31st.